If you’re into UI component reuse, you may have heard of Atomic Design and Pattern Lab. We’re big fans, but Pattern Lab runs on PHP/Node, while we decided long ago to leave the PHP world behind, and concentrate on Django.

We took Pattern Lab with us, and built django-pattern-library – a.k.a. Pattern Lab goes Django.

At Torchbox, pattern libraries are a way to separate concerns between front-end and back-end development. We’ve been using our Django pattern library package for a couple of years to:

Does this sound useful to you? Go and have a look at our introductory presentation from Wagtail Space US 2020, Reusable UI components – A journey from React to Wagtail:

Slides: Wagtail Space US 2020 - Reusable UI components – A journey from React to Wagtail

Pattern Lab has been around for a while, and so has our own django-pattern-library, but we only open-sourced it a few months ago. Sadly it wasn’t as well documented or flexible as we would have liked it to be. This is starting to change with our most recent release. Here are the headline features:

View the full CHANGELOG. Along those shiny features, we also released two massive improvements to the project: a new documentation website, with lots more content – guides, recipes, and reference info. And also a new demo site, so you can see for yourself how the project works (although note the public demo is exported as a static site).

Starting in v0.3.0, you may structure your project’s templates in however many folders you want. This feels like such an obvious need in hindsight, but the pattern library having only been an internal Torchbox project for a while, it didn’t really need to accommodate that many different structures!

This is now possible thanks to the new SECTIONS setting, with the previous predefined structure kept as the default for backwards compatibility. It also comes with a lot of black magic to decide which templates are partials and should be rendered in a base template, and which can be rendered as-is.

This new management command might not be relevant for all projects but it’s worth highlighting use cases this is intended to support:

Combined with tools like Pa11y and pa11y-ci, this makes it much simpler to run site-wide automated accessibility tests for all of your project’s templates, making the most of the pattern library’s tightly controlled mock data. We’re currently experimenting with this in our project’s Gitlab CI pipelines: 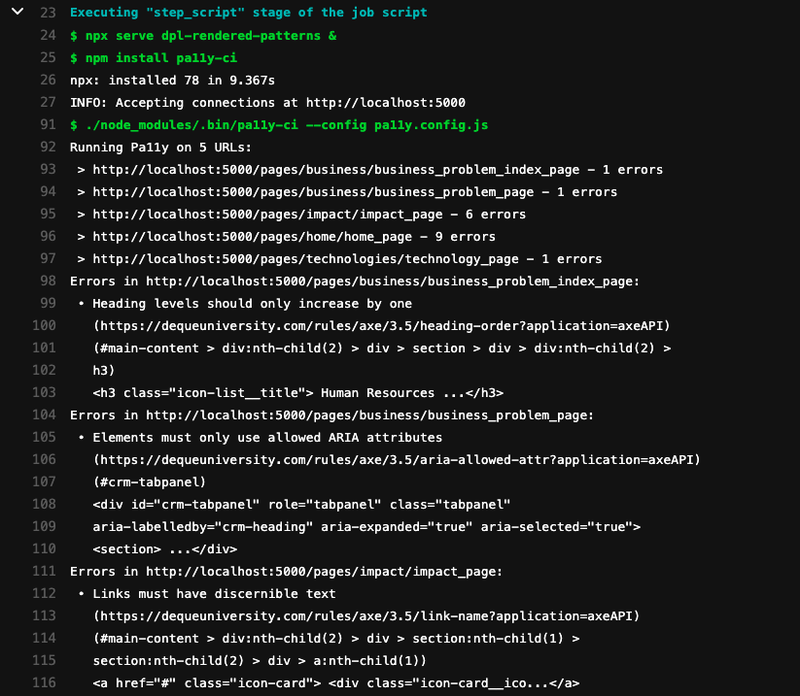 There are still rough edges (for example the command will abort the whole test suite if only a single template fails to render - oops!), but we hope you’ll find uses for this nonetheless.

We’re delighted to be joined by Seth Freach, GOSH Charity’s Head of Digital Development, to share the full story of their migration from Drupal to Wagtail CMS.