As the leading charity for girls and young women in the UK, Girlguiding empowers millions of girls to be their best and to face the challenges of growing up through adventure, friendship and fun. None of this would be possible without the volunteers and supporters who make a difference by donating or giving up their spare time.

Following the launch of their new badges, Girlguiding launched InspireGirls—a multi-channel recruitment campaign aimed at highlighting the rewarding and inspiring roles volunteers play in the lives of girls and young women. Torchbox worked with Girlguiding to plan a 12-month programme of pay-per-click (PPC) activity that balanced paid media spend with Google Ad Grants activity, to increase the visibility of this recruitment campaign and to encourage volunteering signups.

The first step in delivering any successful digital marketing activity involves defining what is always the most important element of a campaign: the right audiences. The team at Girlguiding were keen to not only target people who were already familiar with the organisation, but to also reach people who may never have heard of, or considered, volunteering with Girlguiding. This helped inform our PPC strategy—we put a focus on branded terms but we also explored broader keywords around charity volunteering, volunteering with children and teens, and student volunteering.

Next, we built out extensive keyword lists. We analysed several years of keyword data to decide how best to utilise Girlguiding’s Google Ad Grants account, which provides them with $10,000 of free advertising every month on Google’s Search Network. We were already using their Google Ad Grant to deliver “always-on” volunteering campaigns, so we had a wealth of keyword data to mine for ideas around expected cost-per-clicks (CPCs) and conversion rates. We blended this data with our own keyword research to create a list of highly relevant keywords (and negative keywords) to bid on from the campaign’s outset. From a keyword selection point of view, this preliminary data analysis meant our campaign hit the ground running.

Lastly, we scoped out what we call the “test elements” for our campaign. To ensure we’re making use of the full range of automation tools that Google offers, while also retaining the right level of control over the campaign, we establish these (and corresponding “test budgets”) at the start of every campaign we run. This allows us to think beyond what we already know from running these campaigns in the past, and it pushes us, and our charities, to go outside our established ways of working. For this campaign, we placed the focus on testing ad copy variants, a portfolio of different bid strategies, and a tough, but data-led approach to refining keywords that meant CPCs stayed low, and conversions (volunteer signups) continued to grow each day. 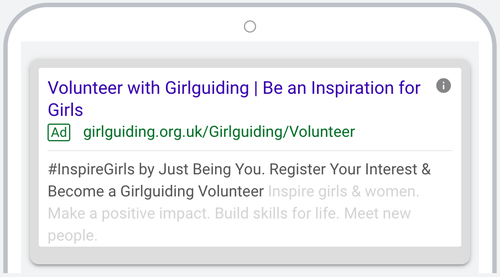 The approach we took to planning this activity paid off, and our digital marketing campaigns delivered against Girlguiding's central brief to recruit volunteers. In a 12 month period:

Our work over the last 12 months has seen thousands of valuable volunteers express interest in volunteering with Girlguiding. These volunteers are vital in helping girls build their confidence and learn new skills. By using Girlguiding’s Google Ad Grants as part of a wider PPC strategy, we were able to kick off the campaign in a strong, data-backed position. Our bid optimisation, continued testing and daily campaign optimisation propelled the campaign further by increasing conversions at a much reduced media spend.