It’s not best practice to educate someone about your cause and ask them to donate to it at the same time. So, how do you justify spending budget on awareness raising activity, and how do you know if it's working?

This was a challenge faced by Open Doors UK, an organisation supporting North Korean Christians through secret networks in China and secret churches in the Middle East. The charity has a large, engaged supporter base, but general public awareness of Christian persecution is low, even among the estimated 33.2 million Christians in the UK. This meant that they were seeing low conversion rates for donation ads to cold audiences.

So, we decided to test a new strategy to address this issue in their most recent appeal by not asking cold audiences for donations. The risk was not insignificant as 29% of donations came from cold audiences in the previous appeal. However, it paid off and led to a 63% increase in donations year on year!

At Torchbox we’ve been supporting Open Doors UK with digital marketing activity since 2018 and we regularly run donation appeals. We're proud to say we've found the right approach when speaking to their warm audiences (people who have an existing connection to the charity), but we felt there was more we could do with cold audiences (people in the UK with an interest in Christianity).

In the past we have focussed on finding cold audiences through interest-based targeting, and judged their performance by how well they responded to a donation ask. We optimised our targeting based on which audiences had the highest click through rates and cost per click, to the point where Facebook cold audience click through rates were higher than the warm audience, but we were seeing low conversion rates once they got to the landing page. This suggested that the cold audience was interested in the issues highlighted in the ads, but not ready to commit to a donation.

We tested a significant change in the CTA in the cold ads from 'donate now' to 'find out more'. Our objective was to drive views of videos and traffic to pages that explain what Open Doors UK do. Once someone clicked a cold ad or watched a video, they would become part of the warm audience and be shown our tried-and-tested donation ask with an emotive story. 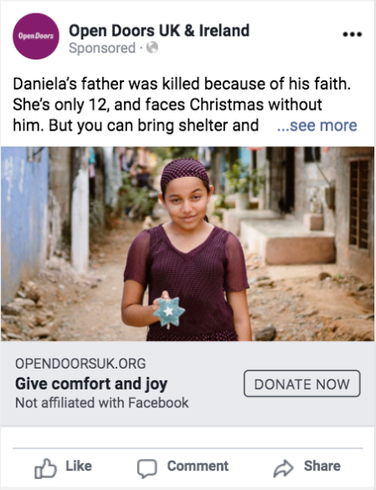 The video creative was originally designed to just be used for a warm donation ask, but we felt that the quick cuts and intriguing hook in the first few seconds meant it worked for cold audiences as well.

Having an engagement-based objective meant that it was viable to run the campaign on a much broader range of platforms. Previously we mostly used paid search ads, Facebook and Instagram, as those were the platforms that converted for donations. In this campaign we added Twitter and YouTube into the mix. All of the channels drove traffic to the website or on-platform engagements, which grew our retargeting audiences.

The value of "warming up" the cold audience with a softer ask was proven by the cost per conversion dropping while revenue and donation volume increased. The campaign generated £76,227.09 of revenue from 794 donations (including assists). This was a 63% increase in donation volume year on year.

The brand awareness activity generated over 3.8 million impressions, 816,706 video views, and 22,225 clicks to the Open Doors website. This was an 84% increase in clicks year on year. 57% of the impressions came from the new channels, YouTube and Twitter.

We are planning to repeat the two-pronged brand awareness and donation strategy for future appeals. It can be hard to fit brand awareness activity into a packed campaign calendar, but thinking of it as a step to improve an existing campaign rather than a brand new experiment can really pay off.

If you would like to chat about how to take your campaigns to the next level, please get in touch.