Afghanistan is in crisis. Many years of conflict, the Covid-19 pandemic and the worst drought in 27 years has led to a catastrophic rise in hunger—with 95% of the population expected to not have enough food. This was only looking to get worse as winter began to set in. In response, the Disasters Emergency Committee (DEC) launched its Afghanistan Crisis Appeal in December 2021 to help raise vital funds for people in Afghanistan.

We ran paid search and paid social activity to support DEC’s efforts, raising £3.2 million (and counting!), with £2.8 million of this being raised in just the first two weeks of the appeal. 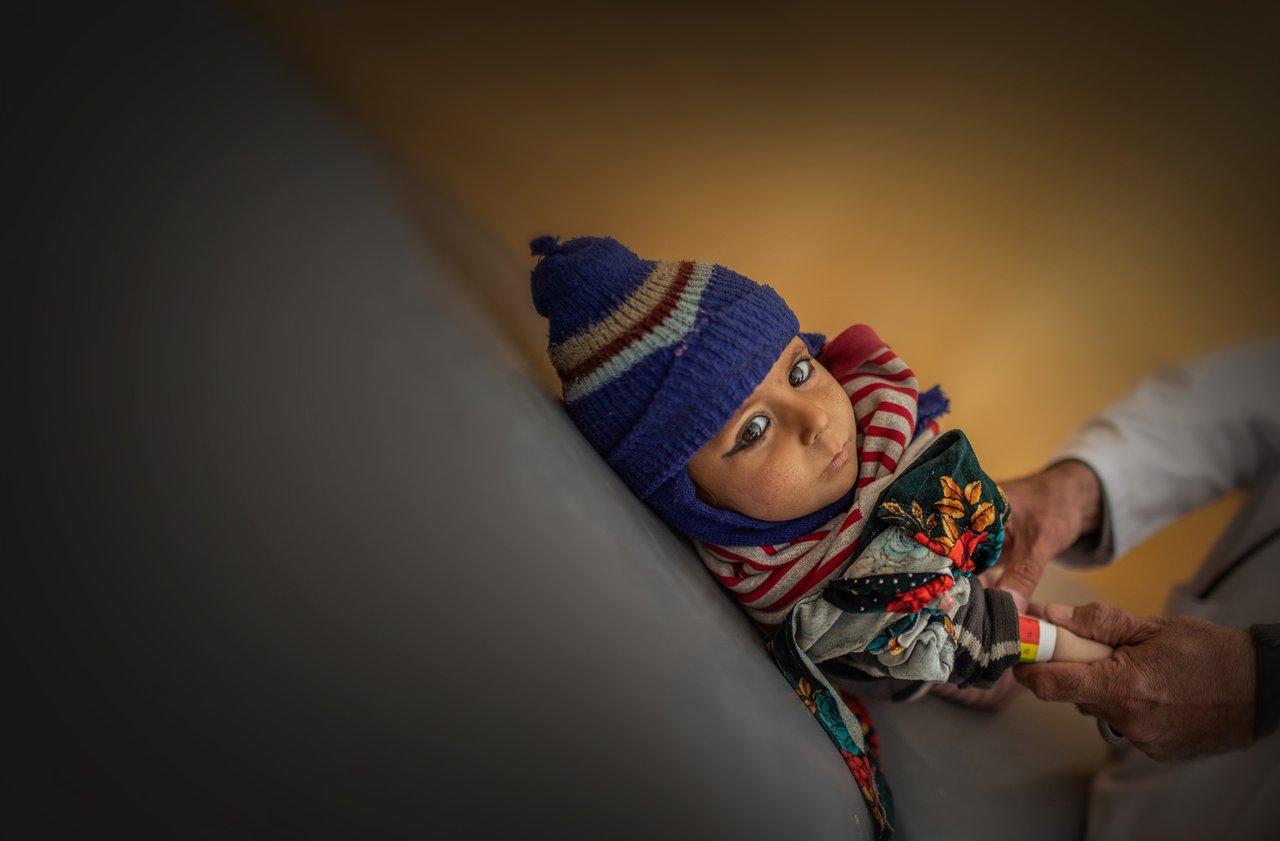 The DEC Afghanistan Crisis appeal came at a time when charitable giving is already at the forefront of people’s minds for Christmas. However, the challenge we faced was to cut through the numerous charity Christmas campaigns to deliver a rather un-festive message centred around famine and devastation. In addition to this, after an initial wave of media coverage on the day the appeal launched, the news cycle at the time was not focused on the situation in Afghanistan. The Covid-19 pandemic continued to dominate attention domestically, and the crisis was not at the forefront of people’s minds in the same way that some of the largest previous DEC appeals (such as natural disasters) had been. We had to get the message out there clearly, and in such a way as to foreground the urgency of getting help into Afghanistan.

At the heart of this campaign’s success was the long-term relationship we have with the DEC. Since 2016, we’ve managed all of DEC’s paid search activity for all their appeals. As with previous campaigns, our PPC efforts focused primarily on Google Ads, with mirrored activity on Microsoft Ads (Bing), a channel that has historically delivered very high ROIs for the DEC. Using remarketing lists for search ads (RLSAs) we were able to tailor our bids based on a user’s previous levels of engagement including previous donors or people who have visited the landing page but have not donated.

We complemented our search campaigns by allocating some test budget to Google Discovery and YouTube Ads. Our primary focus was to generate donations through these channels, while also raising awareness of the crisis. Our approach for both channels used a mixture of prospect targeting and remarketing audiences. For YouTube Ads, we tested a new targeting option called “Dynamic Lineups”: machine-learning powered targeting that now allows great granularity in terms of topic targeting and responsiveness to cultural moments. This ensured the DEC were staying on top of newer targeting technologies.

This was the first appeal we launched for the DEC since being appointed as their paid social media agency. Our primary channels for activity were Facebook and Instagram. We began by establishing a list of primary and secondary prospecting audiences: these were users who were relatively cold in terms of previous engagement, and ranged from people interested in related charities, through to users who were interested in women’s rights, and users who followed particular news outlets on social channels. Prospecting activity was supported by retargeting activity that showed ads to previous DEC donors, Facebook users who had engaged with organic video content in the past and website visitors. Lastly, we allowed Facebook to target lookalike audiences at a 1% likeness to our retargeting audiences and organic Facebook followers. We kept placement targeting tight, limiting to ads shown only in a user’s primary newsfeed.

We also ran test Twitter activity —a channel that had historically generated very little return for the DEC. Given that this campaign has a broader appeal, our aim was to target as many people as possible while also focusing on delivering revenue. We used a mix of broad handle and keyword targeting to target users with a higher propensity to give to charity.

Our testing continued across different call-to-actions (CTAs) and a range of different creative messages. In some ads, we foregrounded the UK Government’s pledge to match pound-for-pound the income raised from donations, while in others we pushed messaging around DEC charities being on the ground to generate urgency with potential donors. All of our creatives used either of the following stats:‘8 million people on the brink of famine’, ‘22 million people going hungry as winter sets in’. We used Dynamic Creative, allowing Facebook to automatically generate text and image combinations based on the data-driven decisions made by algorithms. This is a great way to save time and limit the size and complexity of your Facebook campaigns when you’re building campaigns rapidly and at scale.

In 2020, we carried out a digital review of DEC’s digital marketing activity and identified a number of key opportunities to create more impactful creatives as part of their paid social activity. Based on this, we spent much of 2021 running tests with different creatives—some focused on just imagery, others focused on just text, and some combined both.

Due to time constraints, we launched the Afghanistan Appeal using our template designs (these were pre-approved templates that allowed us to quickly create creatives) but over the course of the campaign, our designs were iterated to focus on key statistics that highlighted the extent of the catastrophe in Afghanistan. 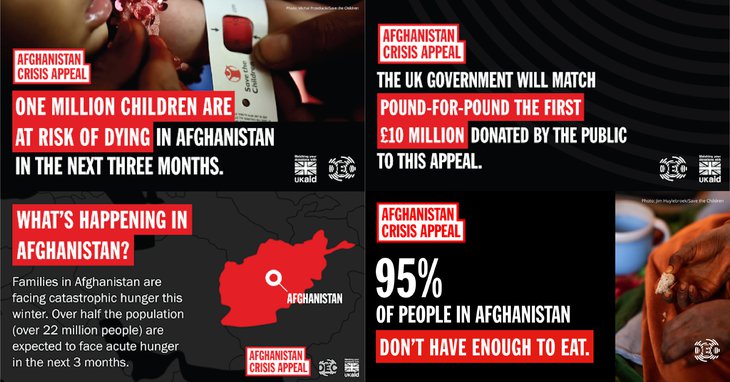 Examples of new designs, focused on impactful stats to illustrate the devastation.

Torchbox built and delivered a Digital Marketing campaign that has achieved incredibly positive results for the early portion of the DEC Afghanistan Crisis Appeal - a testament to their collaborative and innovative approach, and to the deep and real understanding they have of the DEC’s work.

The results we achieved, and the revenue raised by our activity, exceeded any expectations we had; the response from the public so far has been staggering. Here’s how the campaign has gone so far:

This important work, that has been seamlessly integrated into our wider offline and broadcast advertising campaign, has successfully engaged the UK public with the urgent crisis facing the people of Afghanistan. The DEC, and our member charities, are so grateful to the public for the continued outpouring of generosity that we’ve seen in response.

The DEC’s appeal for Afghanistan is still live, so if you’d like to make a donation then please follow this link and give what you can.