In October 2019, during Breast Cancer Awareness Month, the two charities unveiled their new, united charity with the launch of their What We’ll See campaign, demonstrating that while breast cancer still creates fear, if we all act now, we’ll see more hope.

The campaign launched across multiple out-of-home channels including radio, tube and bus posters. Torchbox were asked to spread the message of the new charity using digital channels.

Torchbox ran a multi-channel digital marketing campaign across Facebook, Twitter, Instagram, Microsoft (Bing) Ads, YouTube and Spotify. We were confident from our previous work with Breast Cancer Care that these platforms would bring the new brand to life and maximise visibility.

We took a staggered approach to the campaign with the first phase of our activity focused on targeting warm audiences (previous Breast Cancer Care and Breast Cancer Now website users), Lookalike audiences and prospecting audiences (informed by the knowledge we have of the digital audiences that have worked for both charities historically). This first phase of activity was centred around high-quality video content and powerful static imagery.

The team at Breast Cancer Now were also able to provide us with a breakdown of the radio stations and out-of-home locations in London where marketing activity was taking place, so we could geo-target potential listeners of these stations and visitors in the local area. If someone saw a London underground poster or heard an ad on the radio and then visited Facebook, it’s likely they would also have seen one of our ads.

The ability to target in this way is unique to Facebook so we took a slightly different approach for Twitter. Based on historical activity, we knew that for Breast Cancer Now, videos had high view rates on Twitter so we ran a series of videos complemented by still images. In terms of audiences, we targeted previous website visitors, complemented by a programme of @handle and keyword targeting.

During the campaign's peak, we utilised the branded terms of both charities, and other core breast cancer terms by temporarily altering the messaging of our pay-per-click (PPC) ads on Microsoft (Bing) Ads to focus on the support offered by the newly merged charity, whilst still ensuring the ads provided information for service users.

Lastly, Breast Cancer Now also wanted to reach people who are supporting a loved one through breast cancer to let them know the charity is there to support them. These “inner-circle” users included younger people with parents, grandparents, family members or friends who have been affected by breast cancer. No digital marketing platform offers this kind of targeting, nor would we ever use it given the sensitivities involved. Instead, we opted to use a platform that would achieve wide-scale reach at the lowest cost possible—Spotify was the platform for this.

As this was an untested platform for both legacy charities, we ran the first phase of the activity targeting women aged 18-65+ followed by the second phase of activity where we introduced men as part of the targeting. 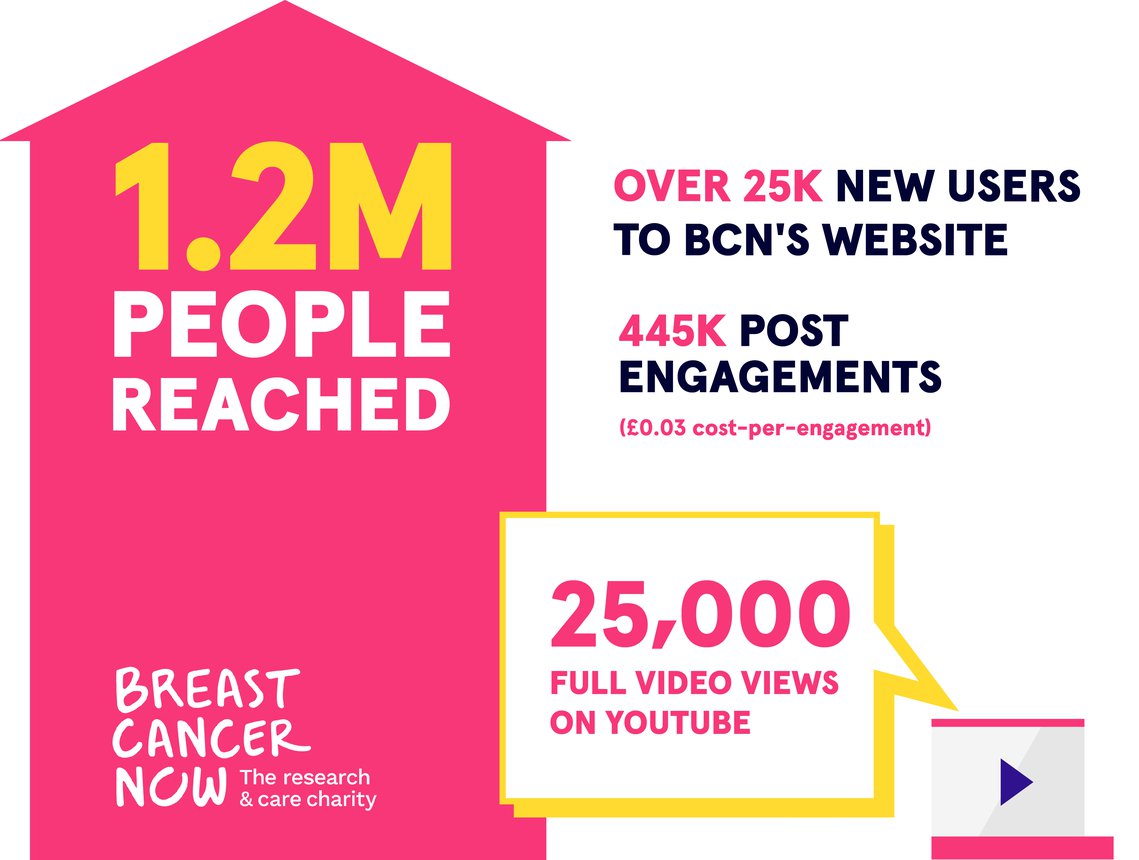 Our in-depth knowledge of the audiences for both legacy charities laid the foundations of this campaign’s success. Contextualised with our understanding with each of the main digital marketing platforms, we maximised the visibility of the new charity and delivered unprecedented engagement levels.

As Breast Cancer Now continues its new journey through 2020 and beyond, we're excited about the possibilities that digital offers in helping the charity cement its place as the first comprehensive UK research and care charity dedicated to supporting people affected by breast cancer.