The aim for the digital component of the campaign was to use digital channels to encourage people to sign up to host an event and fundraise for Breast Cancer Care. We ran paid social media and paid search ads in support of the campaign.

The campaign broke all records for Breast Cancer Care, raising more than any other year previously, and smashing income targets by 30%. Here's what we delivered. 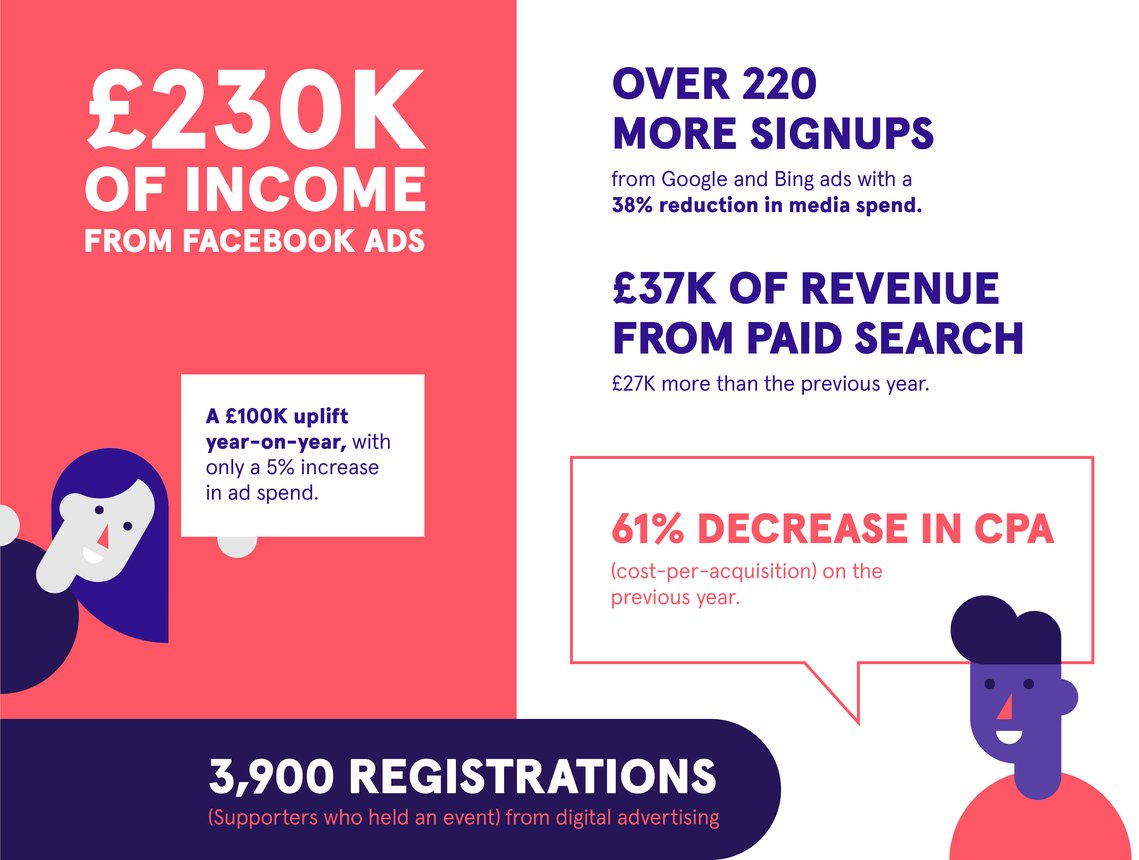 Advertising launched on Facebook, Google Ads and Microsoft (Bing) Ads—our “primary” channels. The team at Breast Cancer Care had already done extensive work exploring their audiences, which gave us clear “topline” demographic targeting to work with. For Afternoon Tea, this audience was women aged 45-70. We added in our own suggestions, contextualised by our knowledge of the targeting capabilities of the channels we were operating on.

Facebook activity focused on talking to users in this demographic who had aligned themselves with specific interests (gardening, food, medical charities etc). It also allowed us to further segment—we had the ability to target parents and grandparents, for instance. We matched relevant text and image creative to each of these user groups to ensure the right messaging reached the right people. This had the added effect of delivering an improved Relevance Score in Facebook—something we worked hard at maintaining throughout the campaign through a rotating series of creatives.

Testing was at the heart of our approach to our Facebook activity. We ran sustained testing in three areas. 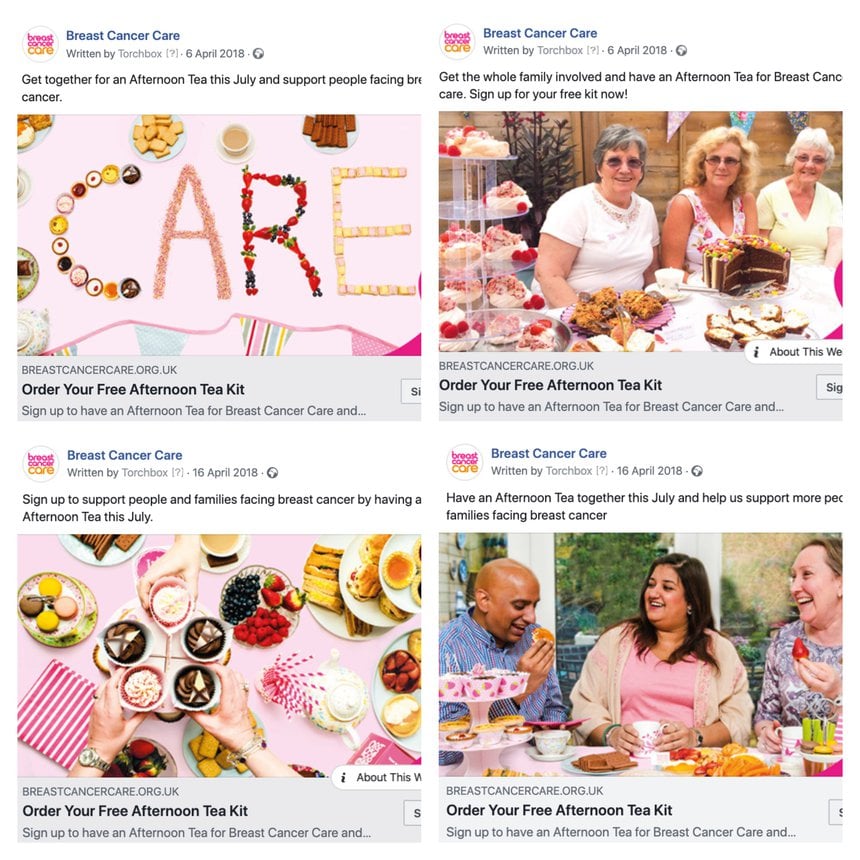 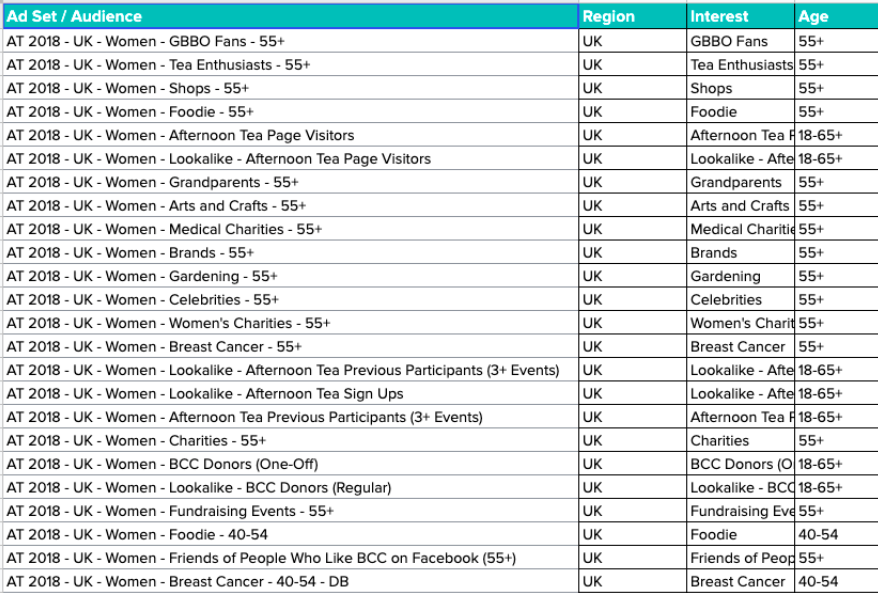 Google Ads allowed us to target users actively searching for keywords relating to charity baking and tea party events—something social media can’t offer in the same way. We were able to serve up ads for “cold” queries like “hold a coffee morning for breast cancer” and “bake sale for charity”; and for warm searches like “breast cancer care afternoon tea”.

Our secondary “stretch” audience were women aged 28-45. Our secondary channels, which we brought into play later in the campaign to reach this audience included Instagram and YouTube. We were lucky enough to have some amazing video content to work with on these platforms, featuring Cold Feet star Faye Ripley.

Cutting through the digital noise

The world of digital marketing can sometimes feel saturated, making it difficult for charities to “cut through”. Worse still, due to the sometimes limited targeting capabilities on social platforms, it’s easy for budget to be wasted on audiences who are simply not interested in your “product”. Over the years, Breast Cancer Care had been building and organising audiences of supporters who had engaged with the charity digitally—“first party” audiences. This paid off come campaign time—we were able to show relevant ads to these warm supporters, ensuring our budgets were focusing on those users already “warm” to the cause. These lists included previous Afternoon Tea participants (broken down into people who had previously hosted 1, 2 or 3+ events in the past).

We added to this “library” of engaged users by using pixel data to build the following audiences across all of active channels:

Breast Cancer Care also provided us with lists of users who they didn’t want us to show ads to, including supporters who had already signed up that year, and people who couldn’t hold an Afternoon Tea this year. This was a nice detail that ensured we weren’t wasting money on unqualified audiences, or pestering people who had already committed to fundraise.

Our activity generated a total of 3,900 Afternoon Tea registrations. These were users who hosted an event and paid fundraising money in. Here are the full set of results:

Torchbox’s bespoke and collaborative approach across PPC and paid social activity was integral to attaining record performance for our two flagship community fundraising events this year, both in terms of participation and income.

Conclusions and next steps

This was a record year for Afternoon Tea. But our work didn’t stop there. We’ve built on our results to run this year's campaign that looks set to eclipse last year’s record-breaking results. Although final numbers aren’t in yet (e.g. the final fundraising amounts) we’ve already delivered 2,100 more event registrations than last year's event—over 6,000 registrations in total.

Breast Cancer Care recently merged with Breast Cancer Now, another charity we support. We’re looking forward to combining the knowledge we have about both organisations to help the merged charity break new records in future work.