In March 2022, the Disasters Emergency Committee (DEC) launched an urgent appeal to raise funds to help those forced to flee their homes in Ukraine. The appeal went on to raise over £350 million, set a Guinness World Record for the most money raised by an online campaign in one week, and saw us deliver our highest profile digital marketing campaign yet.

Here’s how we helped.

The DEC is made up of 15 member charities that are experts in humanitarian aid. These include Oxfam, the British Red Cross, and Save the Children. In recent years, DEC appeals have been launched in response to Cyclone Idai, Coronavirus, and the conflicts in Afghanistan and Myanmar. In a relationship dating back to 2016, Torchbox has run the digital marketing component for each of these appeals.

Given its media prominence, the geopolitical situation in Ukraine needs no introduction. More than 5 million people have fled Ukraine since the conflict began, with a further 7 million displaced. Our response as an organisation, and as human beings, was no doubt the same as yours in the early days of the conflict: fear, combined with a sense of collective powerlessness to help. While it was never in doubt that Torchbox would be there for the DEC, we felt a real sense of urgency to do whatever we could to play a part in the global response to this conflict.

DEC member charities have been in Ukraine and neighbouring countries since the start of the conflict, providing refugees and displaced people with essential hygiene supplies, food, blankets, and other forms of aid. Torchbox’s job was to maximise the digital visibility of this work to as many users as possible under some of the tightest timeframes we’ve ever worked to.

On 3rd March 2022, appeals were broadcast across the BBC, ITV, Channel 4, Channel 5 Sky, and UK radio stations. Within 24 hours, £55m had been donated by the general public, including donations from Her Majesty The Queen, HRH The Prince of Wales, and HRH The Duke of Cambridge. £20 million was donated by the UK Government as part of its UK Aid Match scheme.

On 29th March, Ed Sheeran headlined an ITV-broadcast arena concert to raise money for the appeal. This drove a second wave of traffic and donations to the site.

Throughout the appeal, Torchbox ran all of the digital advertising across the Google and Microsoft Search Networks, Facebook and Instagram, and Google’s Discovery Network. The campaigns were fronted by ads and creative assets produced by our design team. 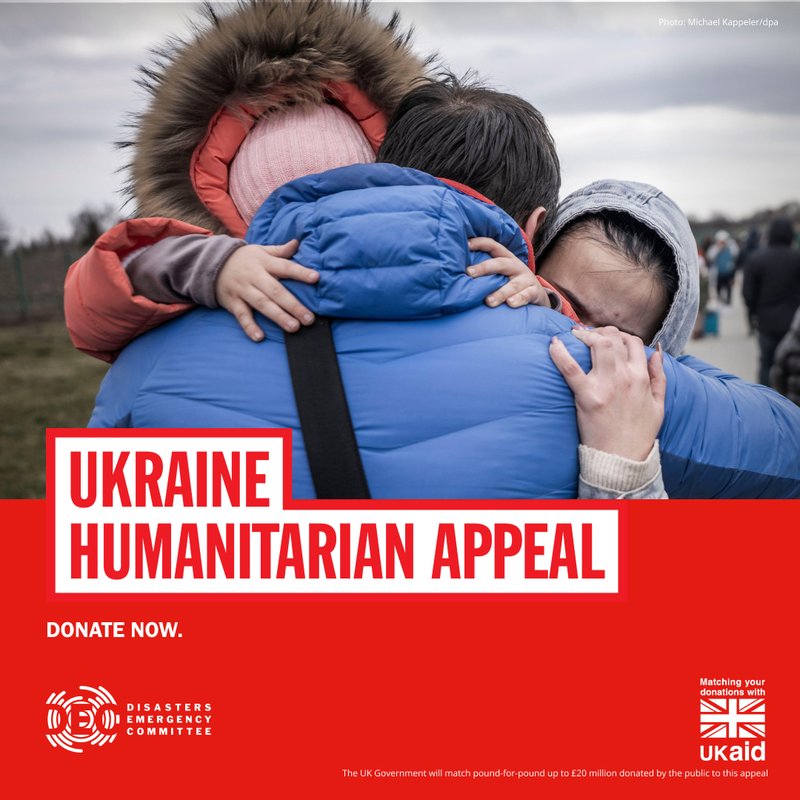 The fundamental challenge that lay at the heart of this campaign was who to target on digital platforms. This challenge was not unique to this particular appeal, but given the overwhelming public interest, it felt more acute.

On pay-per-click (PPC) channels like Google Ads, solving this challenge was reasonably straightforward: budgets were split between branded keywords (e.g. “dec ukraine appeal”) and non-branded keywords like “donate to ukraine”, and ROI was monitored in real time to make sure we were delivering against the DEC’s targets for positive ROI. A challenge existed in knowing how broad to go with non-branded keyword targeting. While “donate to ukraine” would, in a more commercial environment, be referred to as “bottom of the funnel”, other keywords like “how to help ukraine” are more difficult to place in a traditional “purchase” funnel.

On social channels, getting the targeting right was more challenging. In particular, we needed to dramatically improve performance for Twitter and Facebook, which have historically delivered lower ROIs than other channels for the DEC.

We leaned on retargeting audiences, consisting of previous website visitors and users who had engaged with content on the DEC’s social channels. Our prospecting audiences (cold users) were made up of people who had expressed an interest in, amongst other things, related news publications and charitable interests. And we built complex lookalike audiences at varying degrees of similarity to our original source audiences: users like past donors, Facebook page engages, and previous video viewers. Again, ROI was monitored in real time, and the budget was moved across audiences repeatedly throughout the day as data came in.

During the appeal, Facebook announced that it would be removing some targeting options from the platform, meaning we had to think on our feet very quickly and reallocate budgets mid-campaign. In the latter half of the first two-week appeal window, we trialled “broad targeting”—removing any form of overlaid demographic or interest targeting and relying on Facebook’s algorithms to find the right audiences. This approach (which will only work for organisations with sufficient conversion data) delivered a return on investment (ROI) of over £4 profit per pound spent.

Once we’d nailed the right audiences down, we implemented a full-scale creative test and learn programme. This meant mixing up images that foregrounded people, with infographics outlining key details from the conflict. And it meant A/B testing creative messaging that highlighted different aspects of the situation: from the government aid match pledge to specific details around the situation on the ground and how donor money helped.

Lastly, a challenge lay in the limitations we faced with how much data Google Analytics could process. Put simply, the public response to this campaign meant that Google’s daily data collection limits were often reached. As the TV appeals went live, an astonishing 37,000 users appeared in Google Analytics Real Time reporting. 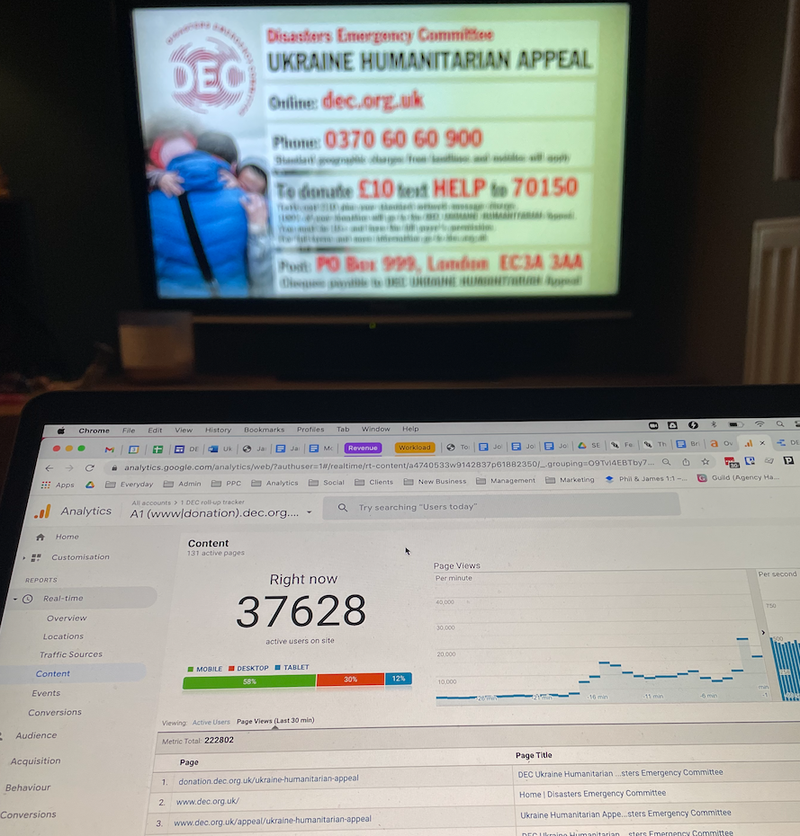 As a result, there were points during this campaign where Torchbox had to rely on instinct and sector understanding gained during the 8 years of working with the DEC and other emergency aid charities on similar appeals. This sector experience allowed us to see beyond the “data blindness” that came with tool limitations.

We're so pleased to be working with Torchbox who have been so committed and operate as a genuine extension of our team. Their expertise has ensured maximised returns from our digital campaign during this special moment of generosity from the UK public.

When the DEC put Torchbox on notice for an appeal launch, we knew this would elicit a strong response from the public. We could never have foreseen quite how strong that response ended up being.

At the DEC’s offices a few months after this campaign launched, our Director of Digital Marketing, Phil McMinn, spoke about the experience of working with the DEC during the Ukraine appeal. In his speech, he made it clear that to have been asked by the DEC to be a partner in this appeal will go down as one of Torchbox’s proudest moments, and that we will be here as partners for the DEC for as long as they need us to be. Whenever the need to launch an appeal next arrives, Torchbox will be standing shoulder-to-shoulder with the DEC. 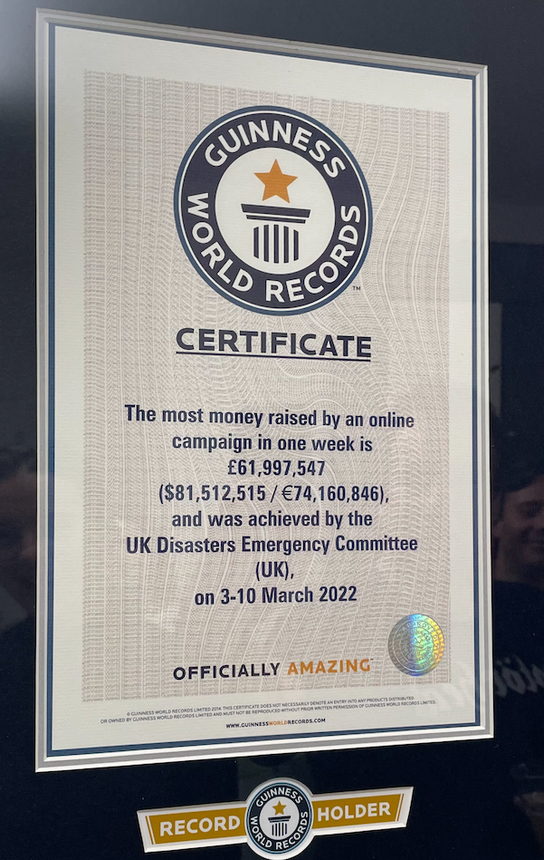