Yesterday afternoon, a few of us gathered on Zoom to wait patiently while watching the live results come through at this year’s The Drum Digital Advertising Awards, for which we’d been nominated for our work with Islamic Relief UK. A campaign where we worked together to raise millions during Ramadan 2020; a project that had already picked up Best Use of Search - Third Sector, at the 2020 UK Search Awards.

It finally came to our category—Not for Profit / Public Sector. Competition felt daunting—the UK and Scottish governments, the British Army, the RAF and more. Cups of tea were nervously sipped as we sat on the edges of our chair. There was no messing around or ‘highly commended’ award; the presenter cut to the chase and announced that Torchbox & Islamic Relief had won! As you can imagine we were rather excited, and small Thursday night drinks were poured. 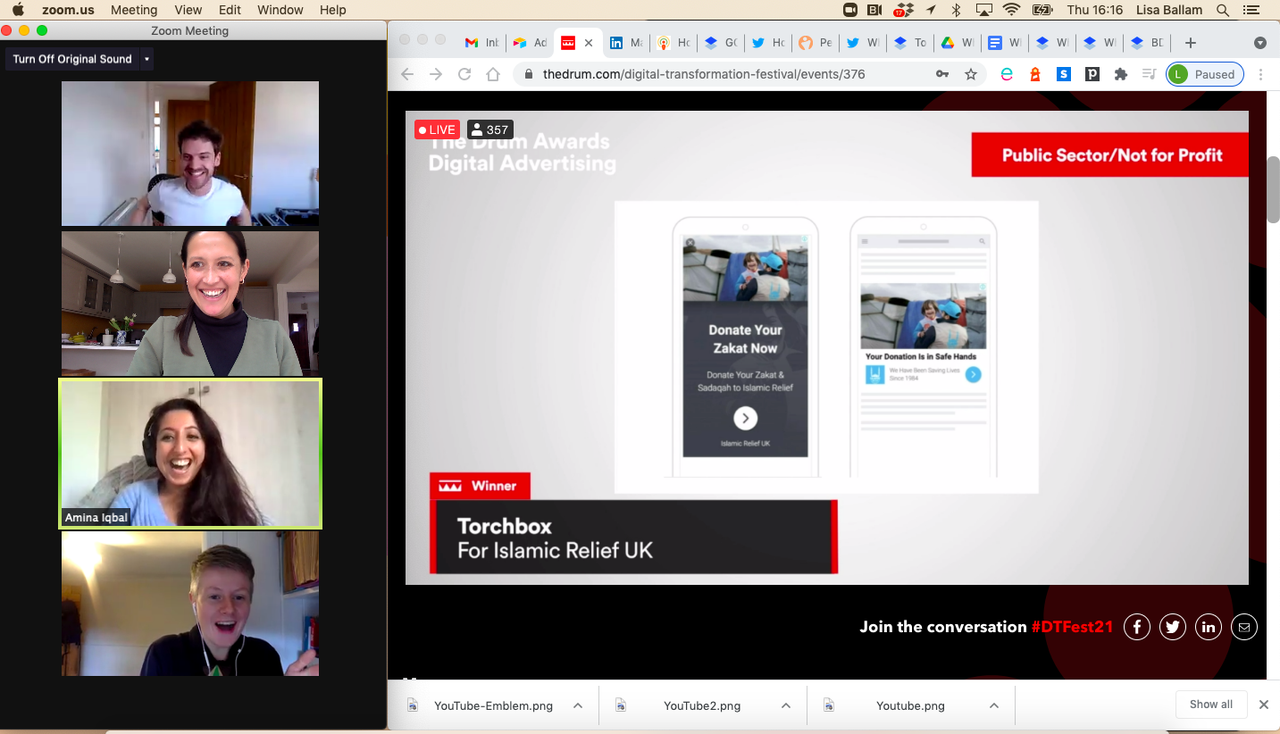 But it didn’t end there. Warm from the glow of the win, we began saying our Zoom farewells before we were notified on Twitter that we had just been selected by Amir Malik (one of this year’s co-chair judges), for the coveted Chair Award, described by The Drum as "a special accolade given to a finalist that marks the best of the show for the judging panel's chairperson.“ Larger drinks were (deservedly, we think) poured!

Here’s what The Drum and Amir had to say on selecting Torchbox as the winner:

"In a difficult year for nonprofits, Torchbox helped Islamic Relief UK use digital marketing channels to deliver vital funds when they were most needed. The objective was to deliver donations from users donating Zakat, Fidyah and Kaffarah during Ramadan, from 23 April to 25 May 2020.

Ramadan is the most important time of the year for IRUK, but getting this campaign right was particularly important in the face of the pandemic: the UK went into 19 lockdown a month before Ramadan started.

The team created a cross-channel digital marketing campaign that included paid search ads, Google Ad Grants management, display, YouTube advertising, and search engine optimisation, exceeding their target more than twice over. These donations allowed the charity to help people and communities impacted by natural disaster and living in warzones, including drought and famine-struck countries across East Africa and communities affected by conflict in Yemen.

Judge’s verdict: Their target was £2.5m – they raised £6.9m. That was amazing to begin with. But in discussions with the judges I was struck but how difficult this campaign was to execute in a pandemic. Everyone is facing their own localised challenges but many still felt compelled to donate. The plight of Yemen and of East Africa are important events we need to be mindful of. The team was able to reach hearts and minds through great optimisation skills and effective use of a whole range of digital channels – YouTube, social, search – and yield a really strong outcome."

To say we’re delighted is a bit of an understatement and we’re so pleased for Islamic Relief UK who are a truly wonderful organisation to work with.

This win is a reflection of two things. Firstly, of our relationship with the amazing team at Islamic Relief UK. This award is as much ours as it is theirs—an awesome team doing life-saving work on the ground in the toughest places in the world. Secondly, of the work the whole Torchbox team do day in, day out, to help nonprofits amplify, and engage audiences with, vital services and support. Thank you to The Drum for recognising us—and the sector—amongst such amazing competition.