On Saturday 14th May, an intrepid team of 15 Torchboxers and family members set off at the crack of dawn to undertake the Yorkshire Three Peaks Challenge. 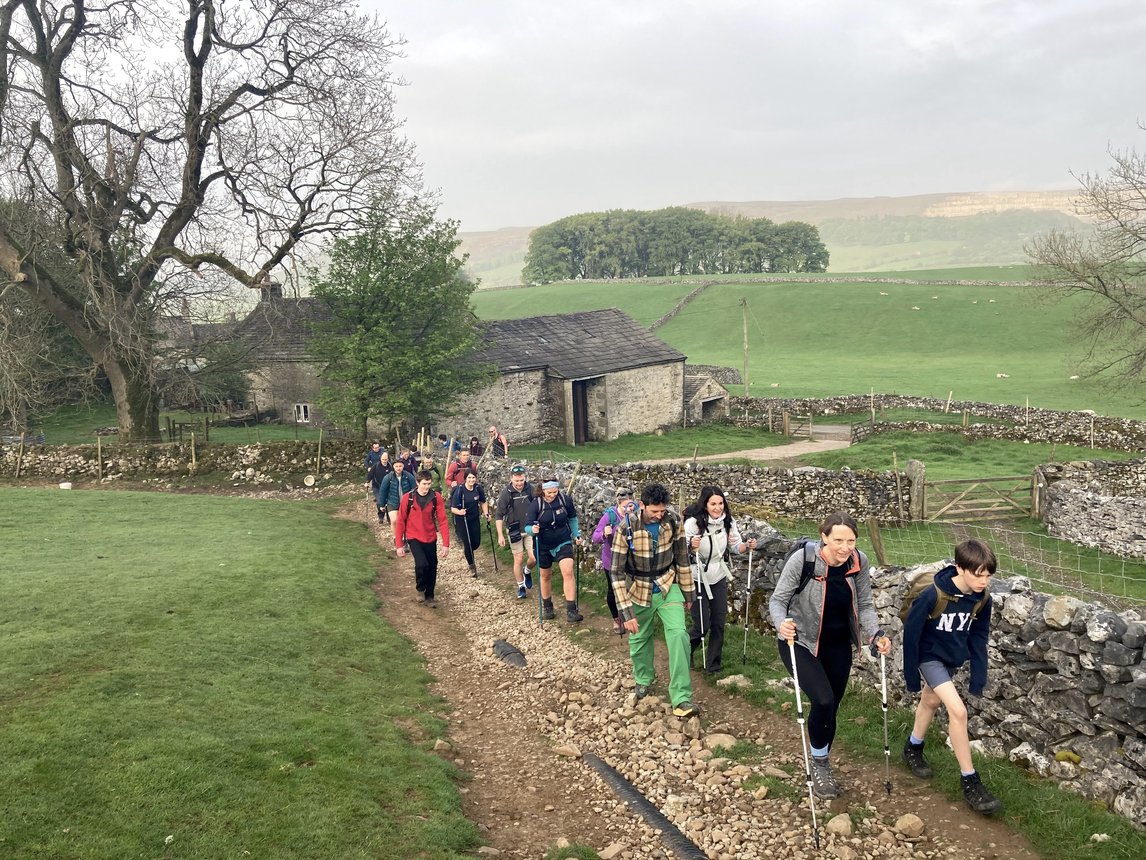 Setting off from Horton-in-Ribblesdale

“OK tough guy so what’s the challenge?” I hear you cry. The challenge is to complete the 25-mile walk and 1580m vertical distance within 12 hours. Our team undertook the walk to raise money for the amazing charity 1625 Independent People, which supports young people in the Southwest. They’re important to Torchbox because we’ve had a foothold in Bristol for 7 years now - half of our team live in or around Bristol so it’s a place we feel we belong and which we’re committed to. And you may also be aware that Bristol has some of the most challenging and heartbreaking homelessness statistics in the UK.

Fortunately, I’m now able to tell you about the day because my fingers constitute one of the few parts of my enfeebled body which don’t ache and/or haven’t fallen off.

We departed at dawn, after a brief hiatus caused by a buggered parking meter at the Horton-in-Ribblesdale car park. Bloody technology.

Personally though, I was gung-ho. What could go wrong?

First up was Pen-y-Ghent. We were very fortunate in that we began the walk in a very atmospheric misty morning gloaming which did a very effective job of hiding the steepness of the first peak from us. Much like the famous brand of 1990s dishwasher, we went on, and on, and on, and Ariston, although with much more variable reliability. Each wall crossing or kissing gate revealed a further section of the walk which got progressively steeper until I felt a bit like Clint Eastwood in the Eiger Sanction except ever so slightly less elegant ( - or fit. or slim. or wealthy.)

The two children in the team ascended Pen-y-Ghent as though it wasn’t there and Seb Leavesley very notably arrived at the top, swished the hair out of his eyes like Tom Cruise, and announced he was hungry. Meanwhile, I quietly hyperventilated against a dry stone wall and regretted my life choices. 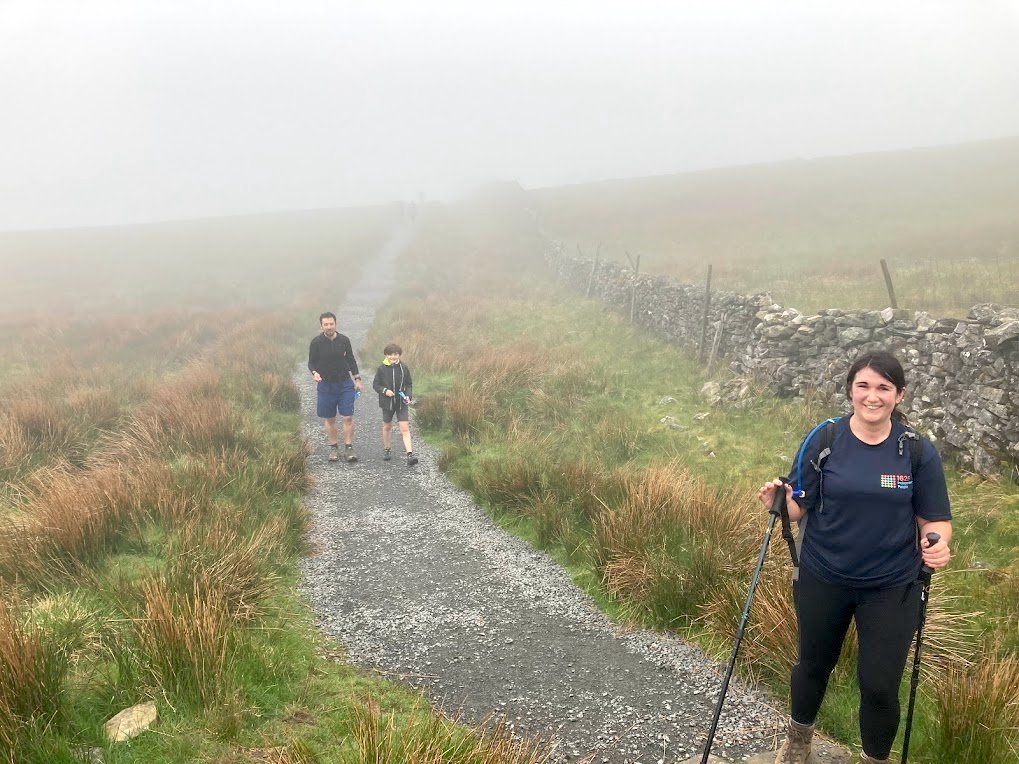 Nat, James and Seb walking in the mist

It’s perhaps worth noting at this point that many people in the Torchbox team are either very fit by virtue of effort or design, regularly do long runs or walks, and - for the most part - had very sensibly spent some months preparing for the three peaks by doing practice walks to get themselves prepared. I upped my swimming cadence a bit, naturally a great form of training for a 25-mile walk and hill ascent. However, I did very sensibly and practically equip myself with some Saucisson sec de Montagne because, of course, it has the word ‘mountain’ in it and must therefore be entirely appropriate. Hm.

The next bit was thankfully downhill, and on this phase of the journey I learned that one of my co-sojourners had a hip flask containing Negroni (what James Bond describes as a ‘solid’ drink). I quietly audited an impassioned conversation about the relative merits of novels featuring unconventional sex and their relative appeal to elderly relatives. Delerium was clearly setting in by this point but we pressed ahead to the Ribblehead Viaduct and the opportunity for a quick breather and the chance to purchase some water from a snack van featuring an obstreperous although highly amusing vendor who reminded me of someone from university back in 1996. I think Goldie may be in touch with her soon to recover his teeth. 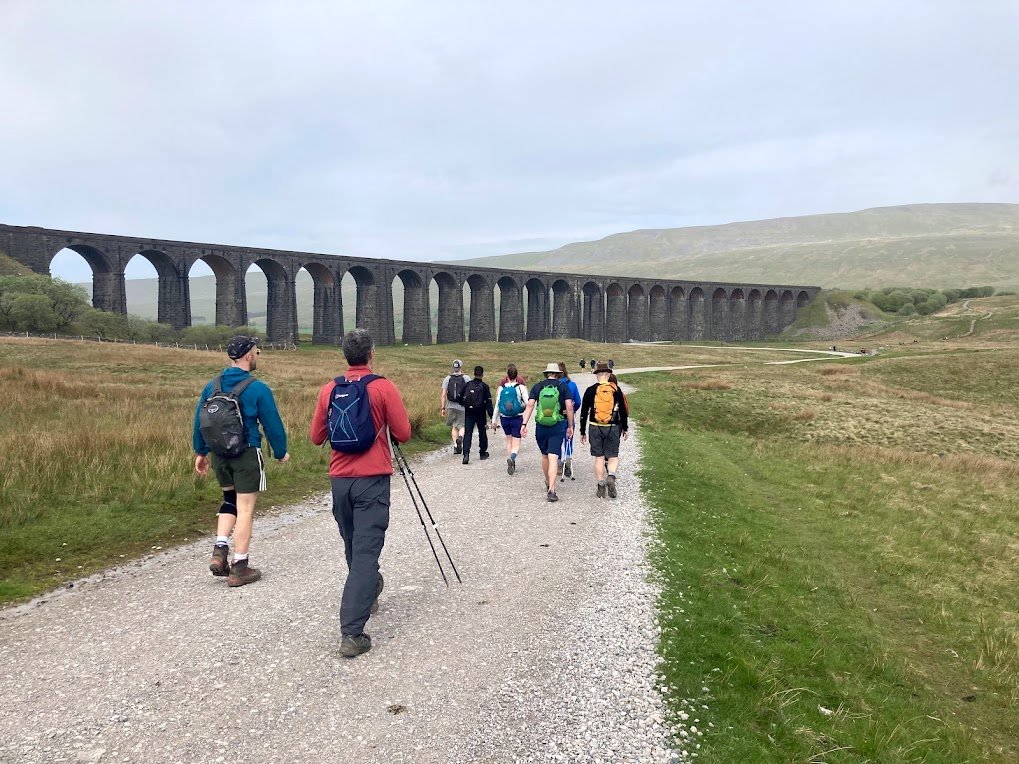 A few people walking towards the Ribblehead Viaduct

Moving swiftly on, Olly, Natalie, and I resolved to make sure we completed the challenge within the 12 hours. This was never in doubt for Olly who tripped the light fantastic like a mountain gazelle. As we ascended it was more a case for me of tripping over the rocks sarcastically like a burlap bag full of monkey shit, all the while breathing (in Olly’s estimation) ‘like a warthog’, which was regrettably but undeniably true. Natalie moved on as a I parked myself to one side of the path in a desperate attempt to regain my breath and dignity. When that didn’t work I pushed ahead regardless and was pleased to be reunited with Olly and Natalie at the top of Whernside. There was a lovely cool breeze. I cracked out some saucisson. We surveyed the horizon. Surely that enormous peak in the distance couldn’t possibly be the third of the day?

From this point forward Natalie was my constant companion. Better equipped, and palpably fitter as undoubtedly she was, Natalie drove us forward to Ingleborough with bags of positivity -  counteracting my tendency towards nihilism and a clear expectation that I was about to die.

Crucially, Natalie chose not to look up at what I called ‘the stairs of doom’ on the side of Ingleborough, creating a psychological firewall for herself that enabled her to get up a good few minutes before me. I in turn was motivated by a native of the Dales behind me who berated the fact that the steps were all of different heights and declared ‘this is an absolute bastard int’it’, which I certainly could not have disagreed with. It was indeed an absolute bastard.

Once at the top we were briefly reunited with Olly and his wife Firoozeh, Helen Chapman and her son Louis who - at 1/3 of everyone else's size - had heroically pushed on through; and finally Gemma, Negroni Nina, and Matthew. Somewhat eroding our moment of triumph a WhatsApp message arrived from those members of the team who had finished the challenge within 9:30 and were comfortably installed at the pub supping ale. As you can see below, Natalie and I sent an appropriate and warm-hearted response to our esteemed colleagues to let them know they were in our thoughts and prayers.

And so we set upon the final 3-mile descent to the start point and home. Except it was in fact 7 miles. Arse.

Natalie and I got a bit of second wind and pushed on through to the end, making the 12-hour mark with a ‘comfortable’ 10 minutes to spare and arriving to the rapturous applause of our annoyingly fitter colleagues who’d been at the pub for the last 3 hours, the bastards. But we did it :) For my part I have to give big props to Natalie who would probably have finished a lot sooner than me had it not been for my wheezing, ponderous progress on the day but whose pep talks were super effective.

We enjoyed a nice dinner together that evening, a sense of accomplishment, a shared experience, and knowing that we’d raised some money for a very deserving cause. And this was the first time in Torchbox history when a social event ended up with everyone tucked up in bed by 10 PM.

Looking forward to next year…

Diversity and Inclusivity at Torchbox