Last month, the High Court ruled against a bathroom retailer which had been bidding on its competitor’s brand terms. This news could potentially impact PPC advertisers around the world, but interestingly, the news has not been picked up by the Search community.

In a ruling dated 18th November 2016, the online bathroom and homeware retailer VictoriaPlum.com was victorious in its legal proceedings against competitor, Victorian Plumbing, for trademark infringement.

As reported by KBBDaily, VictoriaPlum.com claimed that Victorian Plumbing had “paid to advertise in search engine results when consumers had searched for the Victoria Plum brand name and related terms”.

The High Court ruled that Victorian Plumbing had increased spend “from a few hundred pounds to hundreds of thousands of pounds per annum” on paid ads that were liable for trademark infringement.

This is something we actively discourage for our clients, most of whom reside in the charity and NGO sector - not only does it drive up CPCs for all parties, but it feels plain wrong for organisations who are already fighting an uphill battle with limited budgets and resources.

The notion of fighting other charities is madness. Commercial organisations do this all the time, and I can understand why. Just try Googling “money supermarket” for an example of this: 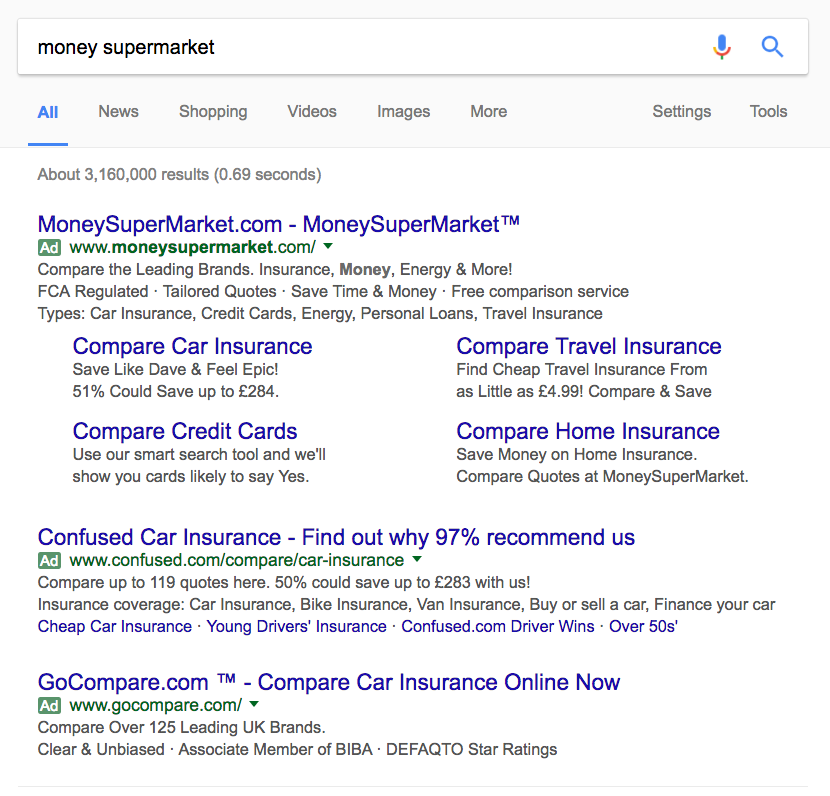 But there are times when our clients have had a legitimate reason to bid on another brand’s keywords when promoting their content to catch an interested, wide audience.

Example content we’ve been asked to promote via paid ads for our clients include: an expose into financial corruption at one of the biggest organisations in the world, a blog post exploring this year’s Apple-FBI encryption dispute and a piece about conservation work done in an African national park whose name was a branded term.

Terms like “charlie hebdo”, “bataclan” and “nhs” are all trademarked but these might be legitimate keywords to bid on for, say, think tanks and news sites when promoting stories or thought pieces about these institutions and organisations.

So, my initial reading of this case had me concerned. What impact would this have on these instances? Furthermore, if a client did want to bid on their competitors (perhaps they were on the receiving end of it in the first place and had had no luck reaching out to the organisation in question to ask them to stop) what should we now advise?

Google’s view on bidding on trademarked keywords is:

“Google won't investigate or restrict the selection of trademarks as keywords, even if we receive a trademark complaint.”

That’s fairly clear - bidding on competitor keywords is OK in Google’s eyes. However, “Google won’t investigate” is not the same thing as an organisation taking another organisation to court over this, is it? If it was that simple, why has this ruling come to pass?

To understand exactly what this means, it’s necessary to dig into the ruling a bit further to find out exactly what the specifics are around this case. In doing so, it becomes clear that this ruling was about more than bidding on trademarked terms. It was also about ad copy, and crucially, misleading customers.

The central issue VictoriaPlum.com had was not just the fact that their competition was bidding on trademarked terms, but that they were also using extremely close variations of branded terms in their ad copy, thereby misleading the customer. The accusation is twofold. Firstly:

“Specifically, the Claimant alleges that the First Defendant has infringed the Victoria Plum(b) marks by bidding on the Claimant's name (or minor variants of that name) as a keyword.”

And secondly (this is the bit that news stories about this case aren’t reporting on so much):

“The Claimant alleges infringement against the First Defendant in respect of… Displaying advertisements on searches of those terms which include the following terms...”

That’s the key detail there—including the trademarked terms in the ad copy.

“When presented with Victoria Plumb advertisements for a business unconnected with that of the First Defendant, it seems to me that there is a propensity for confusion.”

Bidding on trademarked keywords is often necessary and under the rules of Google, it’s allowed. With regard to including those terms in ad copy, Google will only restrict use of trademarks in your ads if “a trademark owner submits a complaint to Google about the use of their trademark in AdWords text ads”. This ruling is not a game-changer for PPC managers and advertisers. But it is a useful indicator in helping us to define the limits of bidding on and using trademarked terms in your ads.

In short: treat each case individually and carefully when using (or requesting an exception for) trademarked terms in ad copy. As always, common sense is your best friend here. If you think there’s an issue, then there probably is. And if you’ve got a legal team in place, it won’t hurt to run ad copy past them if you’re still unsure.

Shortlisted for TWO awards for our work with the DEC